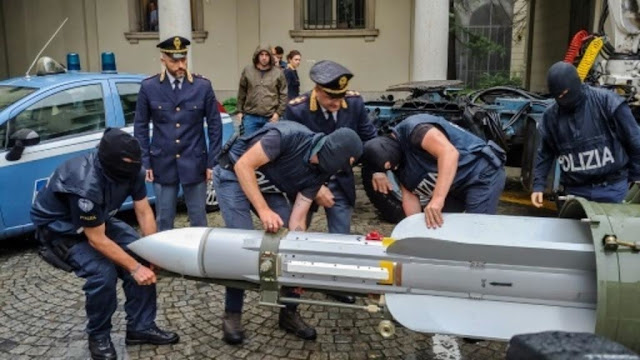 Police in northern Italy have detained three men, including one linked to a neo-fascist Italian political party, after uncovering a huge stash of automatic weapons, material featuring Nazi symbols and a three-metre missile.

In a statement on Monday, Turin police said one of the men arrested, Fabio Del Bergiolo, had run unsuccessfully in 2001 as a Senate candidate for the neo-fascist Forza Nuova party.
At his home in Gallarate, police found nine assault weapons, nearly 30 hunting rifles, pistols and bayonets as well as ammunition and antique Nazi plaques featuring swastikas.

It appears more likely the three were involved in marketing the weapons. The Digos law enforcement agency deals largely with terrorism and organized crime. It led the operation from Turin with assistance from police in Forli, Milan, Novara and Varese.

“During the operation, an air-to-air missile in perfect working order and used by the Qatari army was seized,” police said of the 245-kilogram (540-pound) Mantra Super 530 F missile. They also found “latest generation” automatic assault rifles.